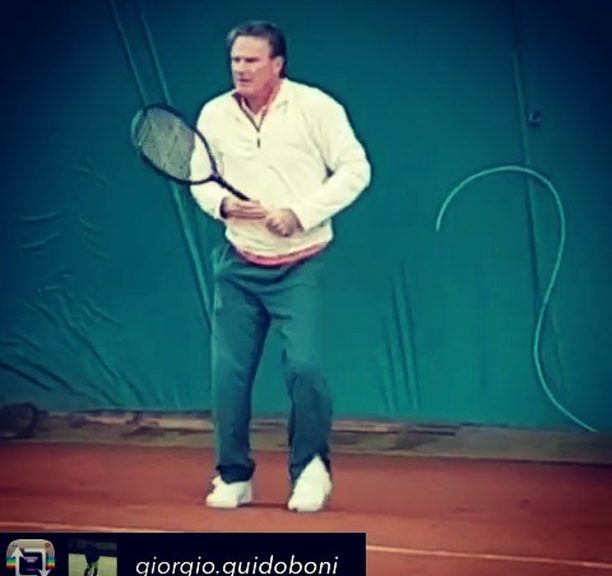 LEGEND ❤️ Jimmy CONNORS 🇺🇸 STILL GOING STRONG 🎾 practising in BOLOGNA – his backhand as always 👊 #repost @giorgio.guidoboni
James Scott ”Jimbo” CONNORS (born September 2, 1952) is a retired American world No. 1 tennis player, often considered among the greatest in the history of the sport. He held the top ATP ranking for a then-record 160 consecutive weeks from 1974 to 1977 and a career total of 268 weeks. CONNORS grew up in East St. Louis, Illinois, across the Mississippi River from St. Louis. During his childhood he was coached and trained by his mother and grandmother. He played in his first U.S. Championship, the U.S. boys’ 11-and-under of 1961, when he was nine years old. Connors’ mother, Gloria, took him to Southern California to be coached by PANCHO SEGURA, starting at age 15, in 1968. Connors won the Junior Orange Bowl in both the 12- and the 14-year categories, and is one of only nine tennis players to win the Junior Orange Bowl championship twice in its 70-year history, which list includes Andy Murray, Jennifer Capriati and Monica Seles. CONNORS turned professional in 1972 and won his first tournament, the Jacksonville Open. Connors was acquiring a reputation as a maverick in 1972 when he refused to join the newly formed Association of Tennis Professionals (ATP), the union that was embraced by most male professional players, in order to play in and dominate a series of smaller tournaments organized by Bill Riordan, his manager. Connors won eight Grand Slam singles championships: five US Opens, two Wimbledons, and one Australian Open. He did not participate in the French Open during his peak years (1974–1978), due to his association with World Team Tennis (WTT). He only played in two Australian Opens in his entire career, winning it in 1974 and reaching the final in 1975. Few highly ranked players, aside from Australians, travelled to Australia for that event up until the mid-1980s. #tennis #tennislife #jimmyconnors #newyork #igdaily #atp #grandslam #usopen #instagood #instagram #sport #federer #instadaily #usa #legendary #history #italy #bologna #nadal #rafanadal #rogerfederer #fitness #legends